Toward A More Perfect Union

In his new book, Toward a More Perfect Union: The Moral and Cultural Case for Teaching the Great American Story, Timothy S. Goeglein responds to the grave reality that generations of American students have been taught that the United States is not an exceptional but an abysmal country. This state of affairs has tragically contributed to a “fragmented America – child vs. parent, young vs. old, rich vs. poor, race vs. race, etc., with each looking out for their self-interests, rather than the greater interest of others and the nation.”

Goeglein argues that the solution lies in reclaiming and celebrating the American story. In Toward a More Perfect Union, Goeglein aims to deepen readers’ understanding and appreciation of America’s founding principles, including religious freedom, and to sharpen their ability to communicate these principles to others.

Join RFI Monday, February 13 at 12PM EST for a book launch event featuring a presentation and discussion led by Goeglein.

*A light lunch will be provided. 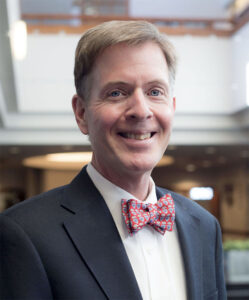 Timothy S. Goeglein is Vice President of External and Government Relations for Focus on the Family. Formerly, he served as a special assistant to President George W. Bush and as a deputy director of the White House Office of Public Liaison. He was the President’s principal outreach contact for conservative and faith-based groups. Tim’s extensive resumé includes serving as a senior fellow at The Heritage Foundation and as a communications director for U.S. Senator Dan Coats of Indiana and Gary Bauer at the Campaign for Working Families. Tim has also authored a memoir, The Man in the Middle: Faith and Politics in the George W. Bush Era, and a book titled American Restoration.