What makes an 11-time bestselling novelist take up the topic of Christian persecution as his 12th project?

In February 2015, ISIS terrorists released a highly polished video showing 21 Christians being marched along the Libyan shoreline. The 21, 20 Coptic Christians from Egypt and one from Ghana, were then brutally beheaded. The terrorists were cloaked in black, their faces concealed, while their captives wore bright jumpsuits, their brave faces bared. ISIS’ goal, as the spokesman in the film made clear, was single-minded: to broadcast its brutality and power for the world to see. Yet, the recording of the gruesome ceremony had the opposite effect. Rather than focusing on the faceless assailants, millions of people concentrated on the victims, who repeated the name of Jesus Christ until their dying breaths.

One of these observers was German author Martin Mosebach, who experienced a moment of “enchantment” when he saw a victim’s picture on the cover of a German magazine. As Mosebach sat penning his 11th novel, the photograph – cut out and mounted on the wall – stared back at him, the man’s serene visage seemingly incompatible with the extreme violence to which he had just been subjected. How could this Copt and his brave compatriots face their horrible end with such extraordinary peace? It was a question that deeply captivated him, so he traveled to Egypt to find the answer.

On February 12, the Religious Freedom Institute (RFI) and The Bruderhof co-sponsored a multi-part forum commemorating the atrocity and the testimony of immeasurable courage and faithfulness it occasioned. The event included a lengthy discussion between Mosebach and RFI Executive Director Kent Hill about his 2018 book, The 21: A Journey into the Land of Coptic Martyrs. A series of speakers and a panel discussion followed, each unpacking the broader social, political, and moral implications of what ISIS did, how these 21 young men responded, and the need for advancing religious freedom in the Middle East and around the world.

As Hill noted in his opening remarks, The 21 stands apart because it focuses on the martyrs, not the perpetrators of violence. According to Mosebach, his approach simply reflected the reality he observed. In conversations with families of the victims, there was no talk of vengeance, or of the terrorists. In fact, during the days of captivity, the young men’s parents prayed not that they would be spared, but that they would be faithful witnesses for Christ. And in a classic case of God bringing good from evil, the ISIS terrorists gave their young victims the opportunity to bear faithful witness before the world in a video that went viral.

Researching the ancient roots of the Coptic Church, Mosebach could not help but be astounded by the linkage between suffering and spiritual fruit. “It was surprising for me how pure the Coptic Church has preserved the origins of Christianity,” he observed. As western Christianity has weakened, these Copts had exhibited a striking faith like that of the early church, which was inextricably linked with the expectation and embrace of martyrdom.

In his keynote address following the discussion with Mosebach, Archbishop Angaelos, head of the Coptic Orthodox Church in London, went a step further, noting that “martyrs were probably the first gospels, because they spoke. They spoke of faith, and they personified and embodied that faith.”

When the Coptic Church decreed February 15 to be the annual Day of Commemoration of Contemporary Martyrs, it was a beginning, not an end; a time of triumph, not of victimhood.

“A video that was meant to terrify,” Archbishop Angaelos noted, “became a tool of outreach.” Yet, although their convictions were as radiant and visible as their orange jumpsuits, many reports denied the connection between their faith and their fate.

Following Archbishop Angaelos’ talk, University of Sussex Professor Mariz Tadros shed light on the realities of “epistemic violence” and the politics of denial, which played a striking role in the frequent, misguided reporting following the release of the video. While ISIS clearly targeted the Copts because of their Christian faith, numerous media outlets focused on the men’s vulnerable status as truck drivers, migrant workers, and Egyptians.

Following Professor Tadros, U.S. Ambassador-at-Large for International Religious Freedom Sam Brownback provided his remarks. Ambassador Brownback touched on the importance of coalition-building and the defeat of tribalism, themes broached by several of the event’s speakers. “Promoting religious freedom worldwide is a priority for this administration and why we are fighting this battle on all fronts,” Ambassador Brownback affirmed. “Fortunately, alliances on the left and right are coming together internationally to stand for this right and against those who would limit it or deny it altogether.”

During the panel discussion, moderated by RFI’s Jeremy Barker, Brookings Institution Senior Fellow Shadi Hamid commented on the theme of pluralism, noting that religious pluralism and political pluralism cannot exist apart from one another. Diminishing the latter will have a correlative effect on the former. Here he briefly reflected on whether authoritarian regimes can be champions of religious freedom, given their inherent opposition to competing ideas that may challenge the state. In considering responses to such regimes, Hamid cautioned against cordoning off minority rights from the rights of the majority, advocating instead for a more expansive view, one that situates minority rights within the broader category of human rights, to be enjoyed equally by all.

The panel members agreed that encouraging a shared sense of common good among citizens of different faiths is vital for improving the situation in the Middle East and the prospects for religious freedom there in particular. Hudson Institute Senior Fellow Samuel Tadros discussed the relationship between theological beliefs about ultimate reality and the daily concerns of religiously diverse citizens. He raised practical questions about the intersection of equal citizenship, religious freedom, and theological conviction. His comments cut to the core of pluralism, challenging the audience to consider how deep theological divides manifest themselves in politics and law in Egypt and elsewhere.

At the conclusion of the event, RFI Executive Director Kent Hill reminded the audience that religious freedom matters because religion itself matters. “We can’t be human,” Hill explained, “if we can’t ask transcendent questions and try to be faithful to what we find.”

In this light, the 21 martyrs remembered and honored during this event were indeed fully human, which was borne out by how they lived in this world, to the end. But, as Archbishop Angaelos eloquently stated during his keynote address, they were “a testimony to another world.” 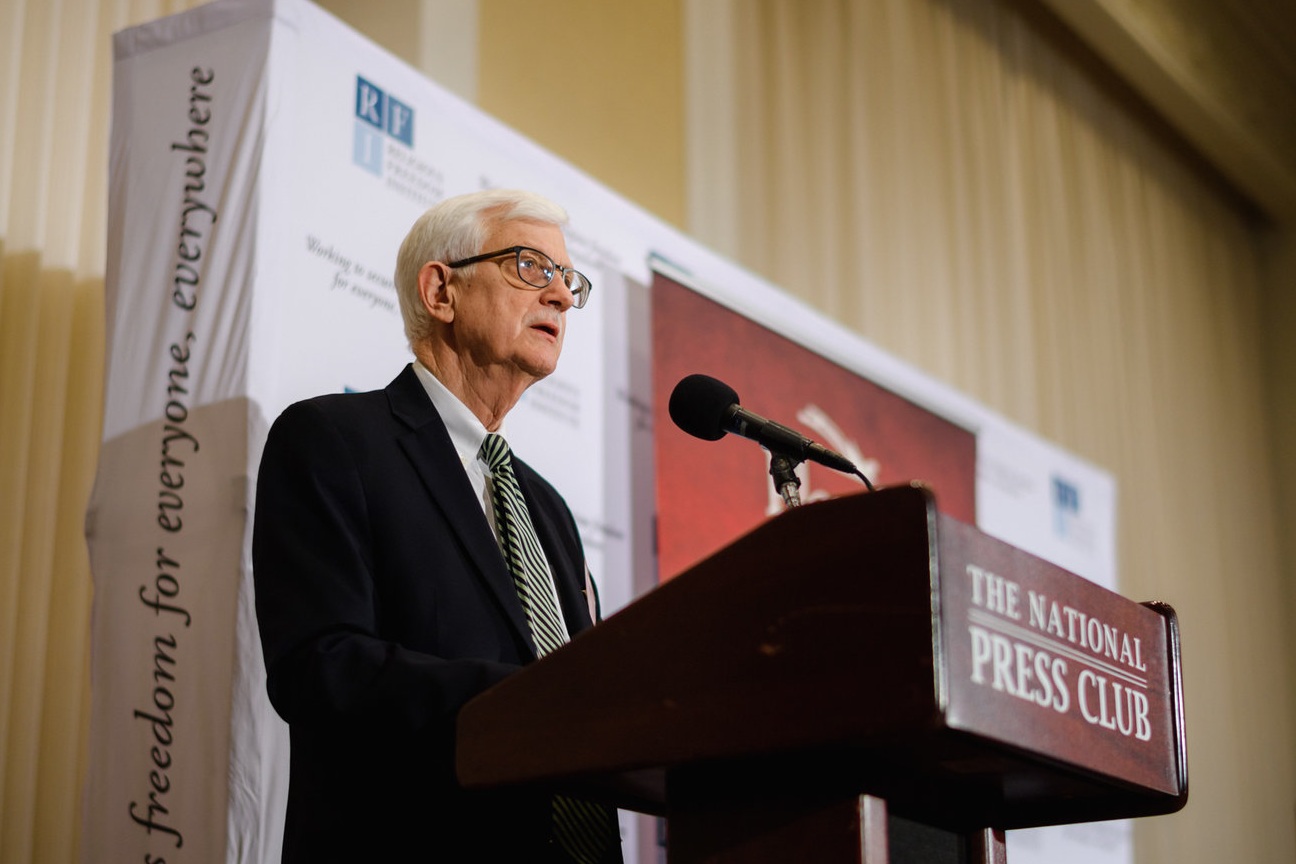 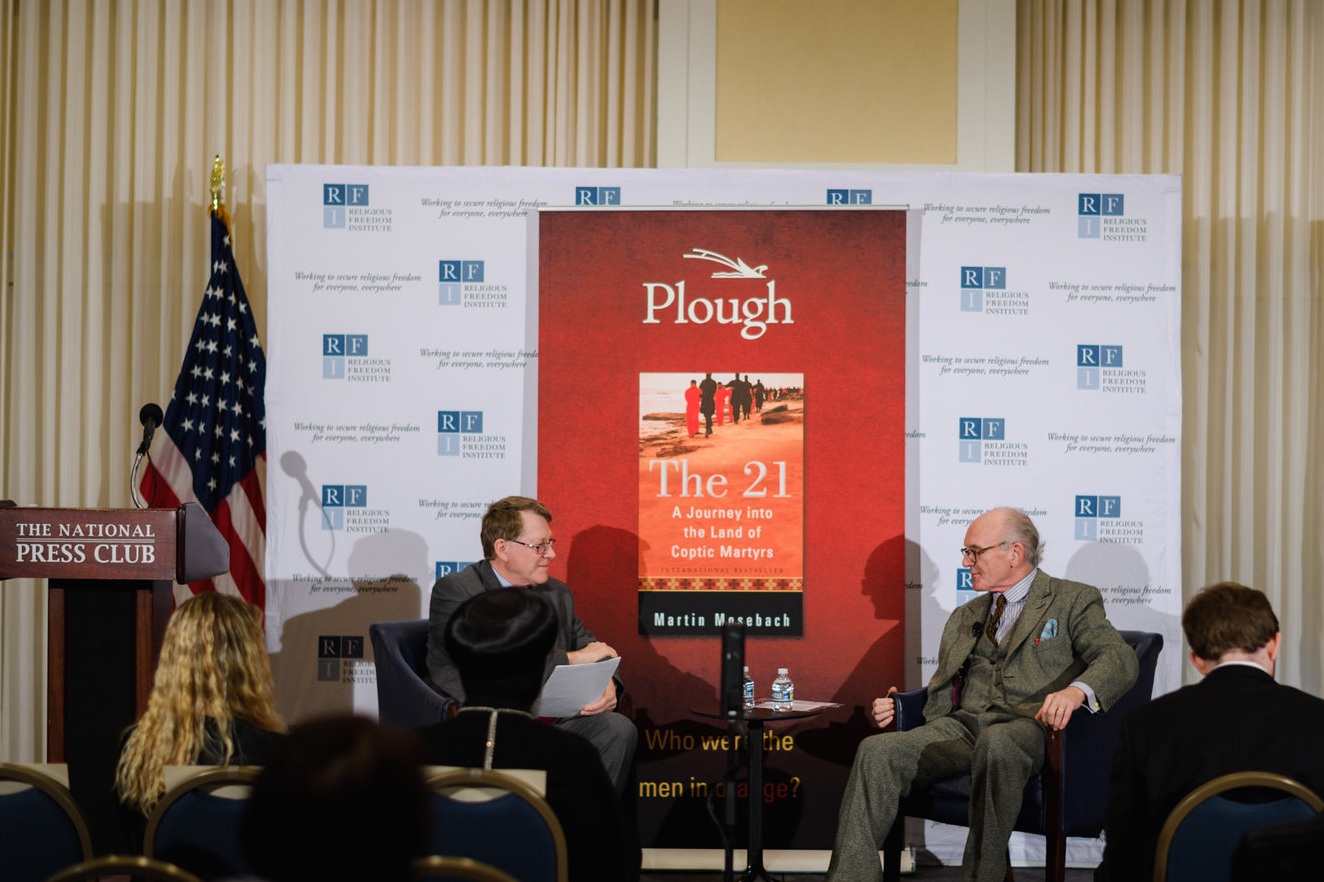 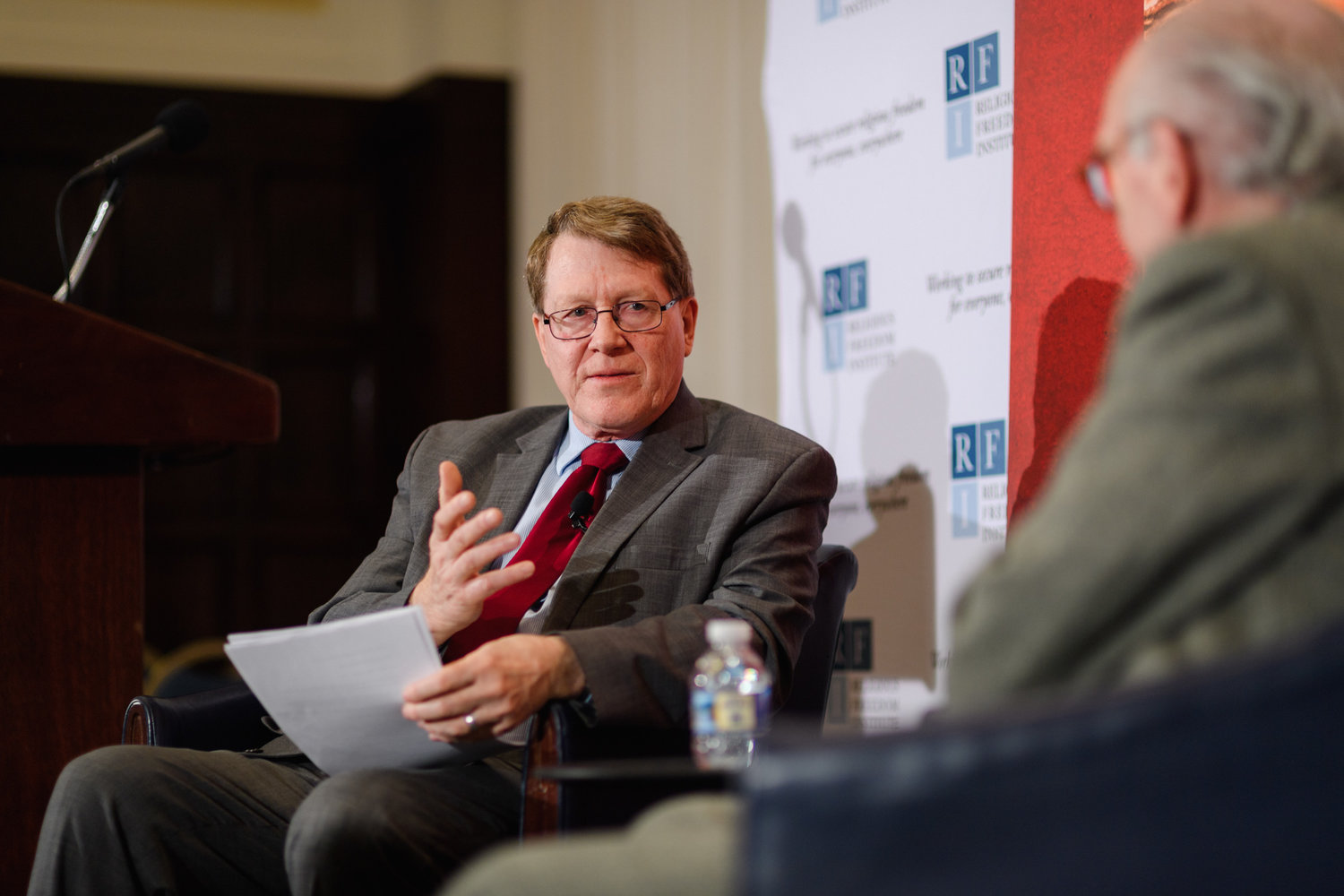 Kent Hill, Executive Director, Religious Freedom Institute, interviews author Martin Mosebach on what he learned in writing his book on the martyrdom of 21 Christians killed in Libya.
Photo: RFI/Nathan Mitchell 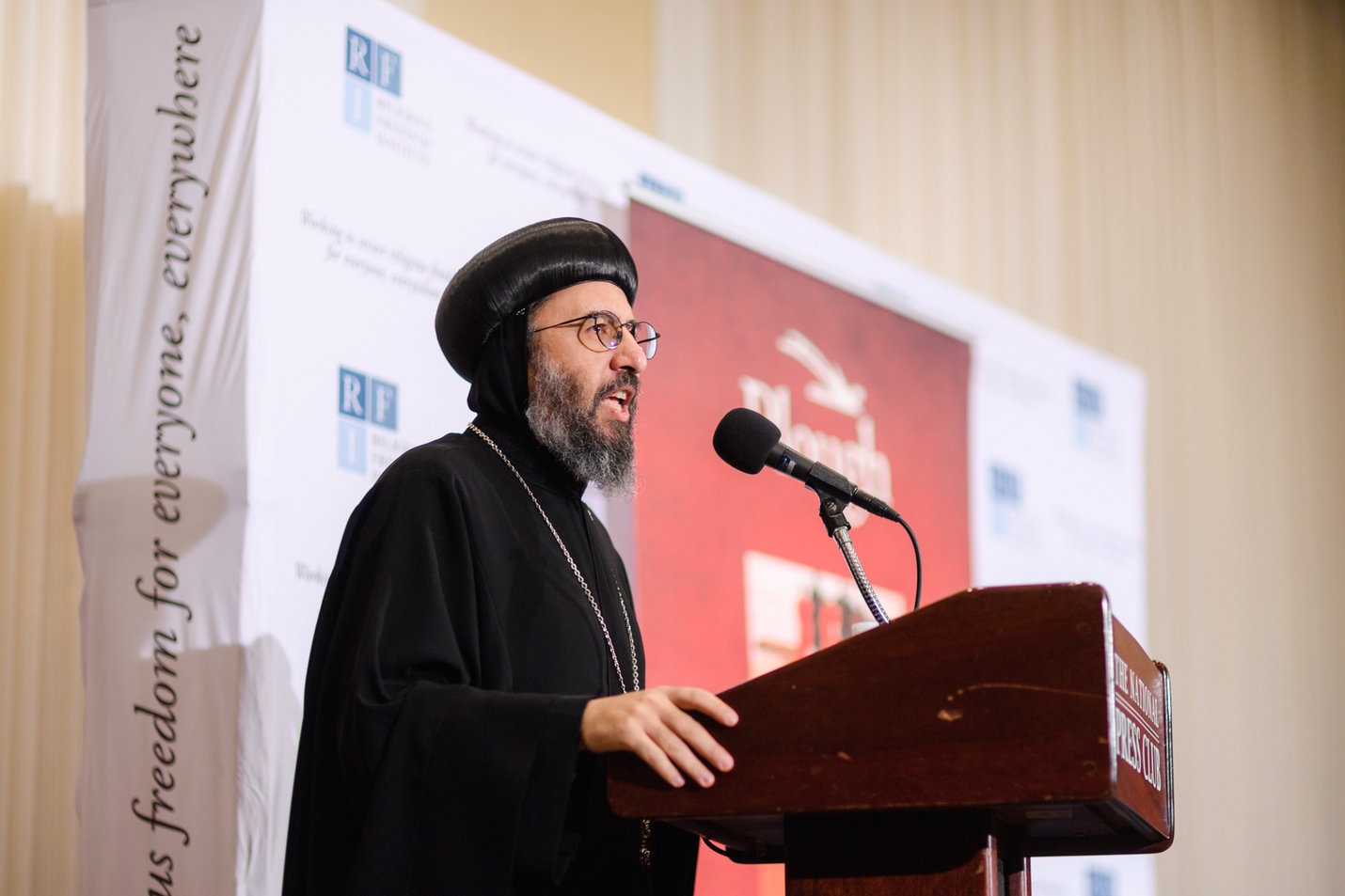 Archbishop Angaelos, Coptic Orthodox Archbishop of London, delivers a keynote address on the impact of the 21 martyrs four years after they were killed in Libya. 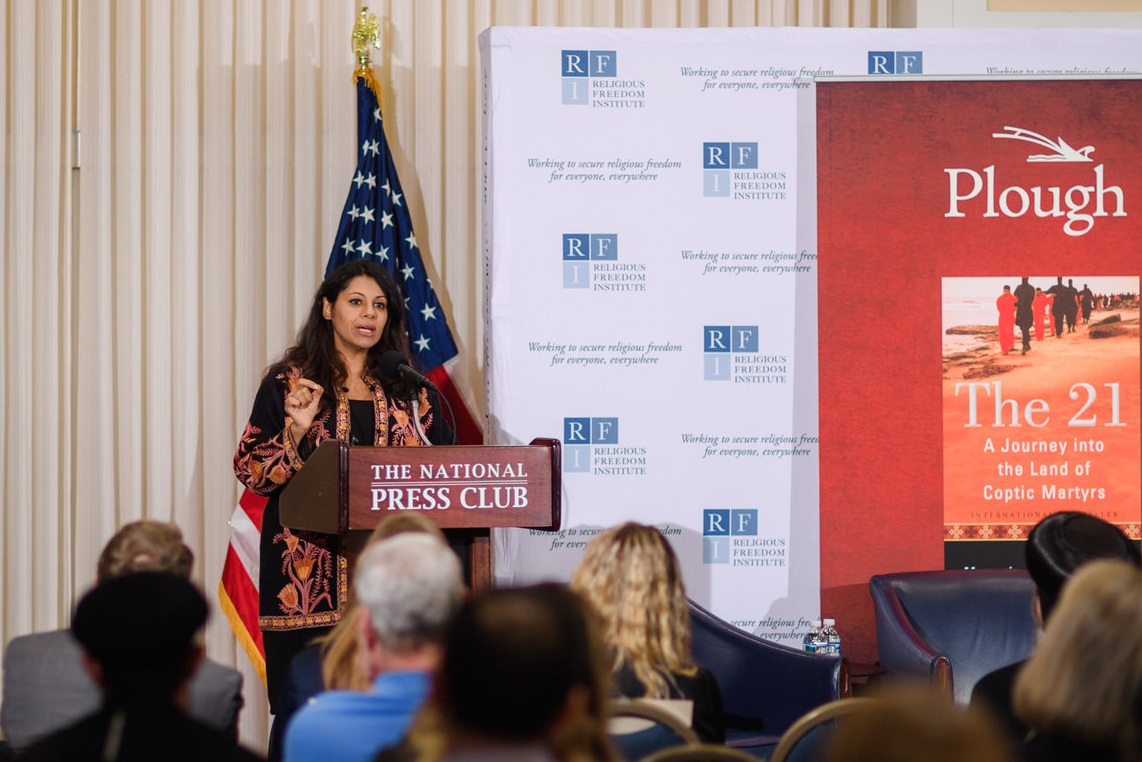 Mariz Tadros, Professor of Politics and Development at the Institute of Development Studies, University of Sussex, delivers remarks on the importance of inclusive development for addressing religious inequalities.
Photo: RFI/Nathan Mitchell 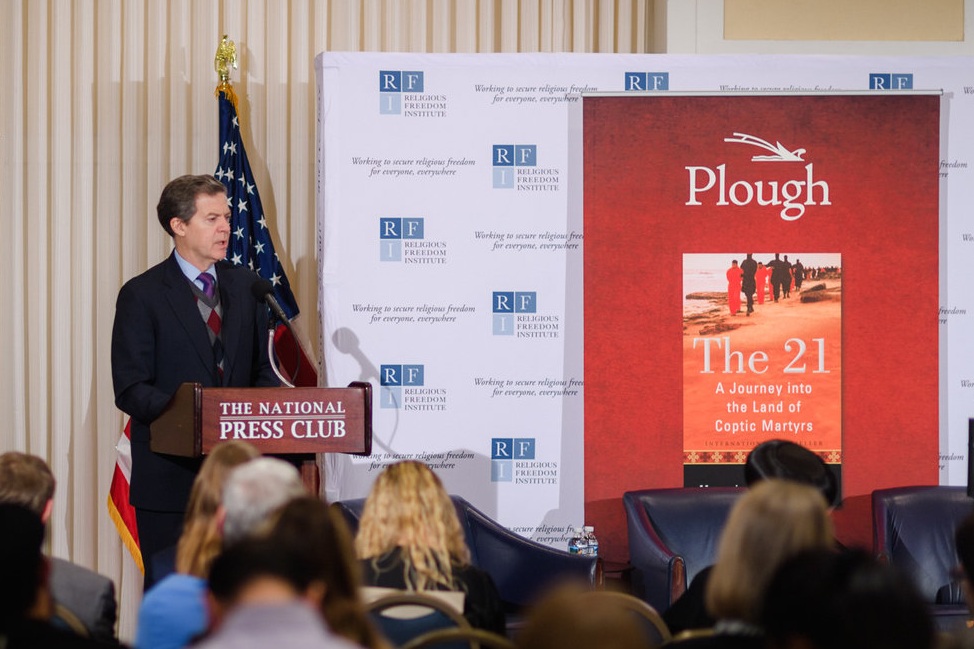 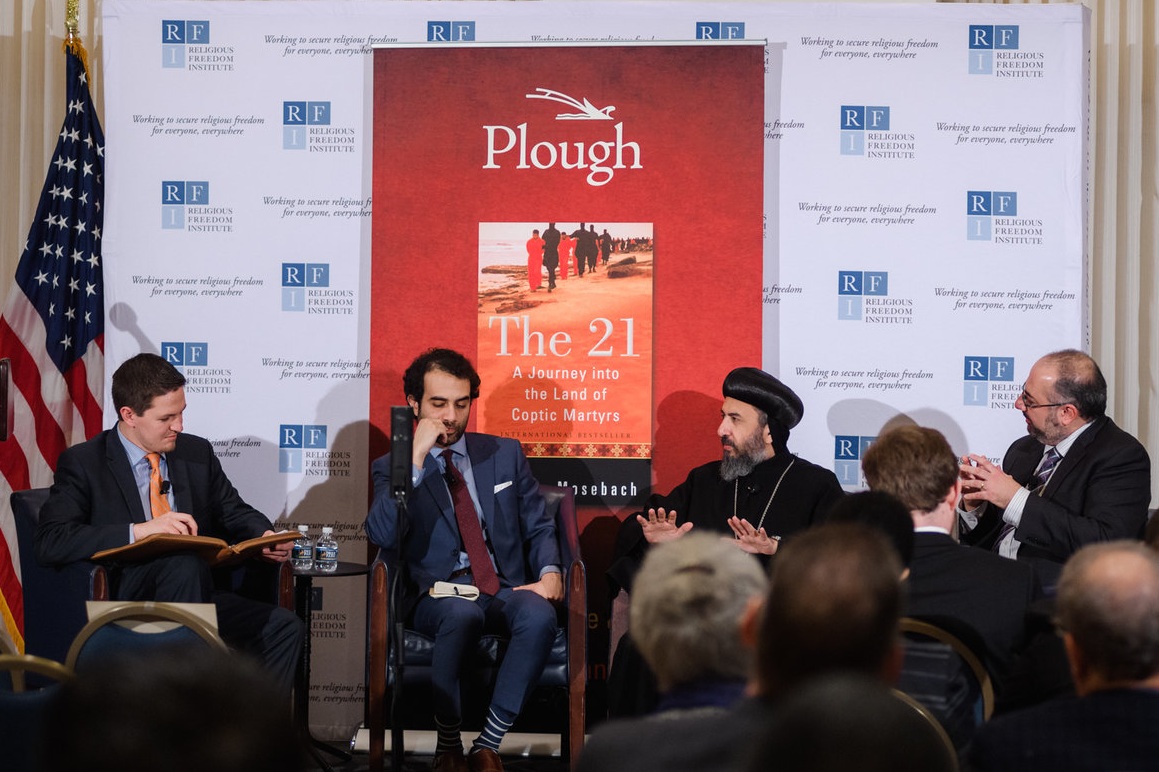